Let Me Tell You My Story

I was born and raised in Albany, NY, where I learned the meaning of hard work from my German-immigrant father and Jersey-girl mother. My father was a refugee during WWII. He eventually came to America with $200 borrowed dollars in his pocket and a suitcase. He met my mother and started a family. They had simple rules: you did your best, you were honest and true, and you helped people.

They blessed me with a sense of adventure. I love to travel and explore. I've been to every continent except Antarctica. They also gave me the gift of gab (or maybe I got it when I kissed the Blarney Stone in Ireland). But it's most likely in the genes. In grade school, I was scolded in a report card for being a "social butterfly" who talked too much! Since when is being too social a bad thing? Talking too much has served me well in life. I've made a living by being a public speaker!

My sense of adventure led me to the field of television journalism. I spent 3 decades traveling the globe telling stories. I've been to war-zones and holy sites, I've ridden rollercoasters and walked in protests, I've burned down houses, crashed cars and escaped icy waters — all in the name of reporting. As a correspondent for CBS News, I broke the story of the largest crib recall in U.S. history. On 9/11, I was the second reporter to arrive at the scene of the crash of Flight 93 in Pennsylvania. I have been honored with 9 Emmys and numerous other awards for my work as a journalist. I always made it my mission to tell stories that had "news you can use" and to tell them in my own unique style. Along with my time as a consumer correspondent for CBS News, I have been an anchor/reporter at KDKA (Pittsburgh, PA), WTAE (Pittsburgh, PA), WHEC (Rochester, NY), WKTV (Utica, NY) and WNYT (Albany, NY).

In 2011, I became the story. While out for a 3 mile run on a beautiful Sunday morning, I collapsed on the sidewalk. I had suffered sudden cardiac arrest. If you pay attention to statistics, I shouldn't even be here. Sudden cardiac arrest, outside of a hospital, is 90% fatal. I was clinically dead for 7 minutes. But my chain of survival was strong that day! My running friends waved down help. Two medical students stopped and gave me immediate bystander CPR. Firefighters arrived in just minutes and shocked my heart with an AED. I feel I was saved so I could share my story — and my tale of survival has been shared around the world.

If there is one word to define me, it would have to be resilience. I came back from my near-death experience even better and stronger. The day after I was released from the hospital, I went to the gym to walk on the treadmill (even though I was walking with a cane at the time). During my television career, I lost my job (twice). The first time — I was a correspondent for CBS News based in New York. The show was "moving in a new direction." The second time — I was the anchor of the evening news in Pittsburgh, and we were in the middle of a worldwide pandemic. I, like millions of Americans, lost my job. My position was eliminated. But each and every time I have been faced with a hardship, I have found a silver-lining. The bumps in the road give me the reasons to pursue bigger and better things and push forward. I live each day to the fullest, I am still seeking adventure at every turn and yes... I still love to talk — a lot. Just ask my family. 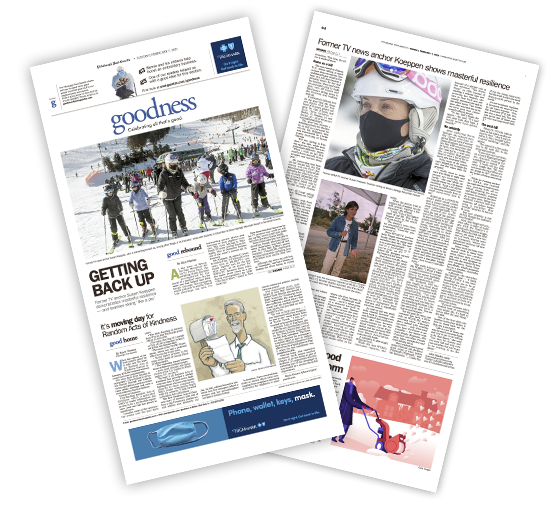 Want to Learn More About Me?